I’m just popping in to share a quick card that I made for my hubby a couple of weeks ago.

I stumbled upon Gerda Steiner Designs by accident as I was browsing through Instagram one day. I’d seen a card that someone had made using one of her adorable stamp sets. I immediately went to the link to her blog & store in her profile. I fell in love with all of the adorable, quirky stamp sets. I’d ordered one set and then decided on a couple more sets at a later date. They’re so much fun.

The card I’m sharing today uses the Alien Invasion set which features 3 cute little aliens, an earth, a moon, a spaceship, some stars, two different smiles to put on the aliens faces and a banner and several sentiments. There’s 14 total stamps in the set. They’re too stinkin’ cute! (EEEKKK -Unfortunately it’s currently sold out – but if you’re in love with it – keep checking back as I’m sure it will be in stock again soon).

I’d set out to make a card to cheer up my husband who’s been a bit down after a rough couple of weeks. He lost his job a week ago Thursday. Of course losing a job is always difficult, but it’s not the end of the world and I know he’ll find something again soon. Bigger and better as I always say. When one door closes, another one opens and it usually brings about better opportunities – at least that’s what we’re hoping for!

To create my card, first I stamped the waving alien and then I stamped a big cheezy grin on his face (BTW – love that ou can stamp different smiles with this set) and colored him in shades of purple with my Copic markers. I also gave him an orange nose. Once finished I fussy cut him and set him aside.

Next I stamped little alien with the goofy ears. I new he was going to be flying the spaceship so I stamped him first and then stamped him again onto a peice of Post-it note to create a mask. I fussy cut him out of the Post-it note and carefully placed it over my original stamped image to mask it in order for me to stamp the spaceship around him to give the appearance that he’s piloting it. I did have one minor mistake in doing this, as my mask didn’t cover everything since I missed covering one of his arms, but I was able to fix it and it’s not horribly noticible. 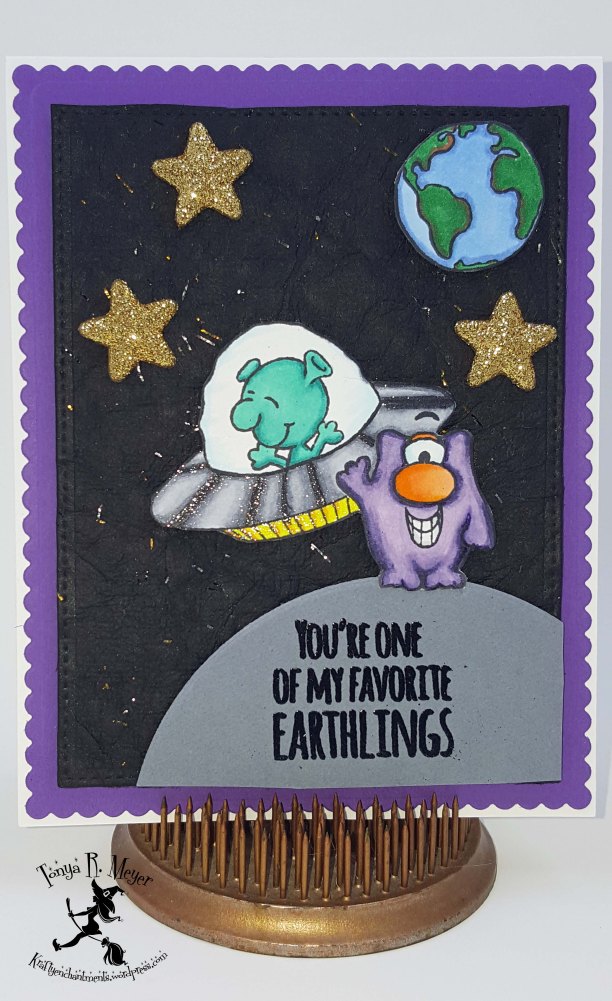 I colored the spaceship and the alien with my Copics and fussy cut them out.I added a little bit of Spectrum Noir black sparkle pens to my spaceship also.

Finally I stamped the earth and colored and cut it out as well.

I’d wanted to create a starry background, but I was pressed for time and didn’t have a die that would work well enough to make it appear like it was in space. I ended up digging through some really, really old paper I’d stashed away. I’ve had this paper forever (I don’t even remember where I bought it) and there are several different designs that came in the package. All of it is made of linen fibers and has been foiled and in some cases stitched throughout. For this card, I selected a peice that had silver and gold tinsel flakes in it. It really gives off a lot of sparkle and worked perfectly for my card to give the appears of stars twinkling in the backdrop. I guess this is why I’m a paper hoarder – you never know when you’re going to need something for a project.

I die cut my background with a stitched rectangle. Next I used a stitched circle die and cut a peice of grey cardstock. Once cut, I used my paper trimmer to cut the circle into a quarter.I stamped the sentiment “you’re one of my favorite Earthlings” with some versamark and used some black embossing powder to heat embossi it.  I adhered it to the lower corner of my background and then trimmed off the excess with my scissors.

Finally I was able to  add my aliens and earth to the background using some dimensional foam tape.

The background was added to a peice of purple cardstock that I die cut with my Die-Namics Blueprints #24.

I added 3 little glittery gold stars to give it some more dimension and some more Spectrum Noir Sparkle pens in various places to add more sparkle. 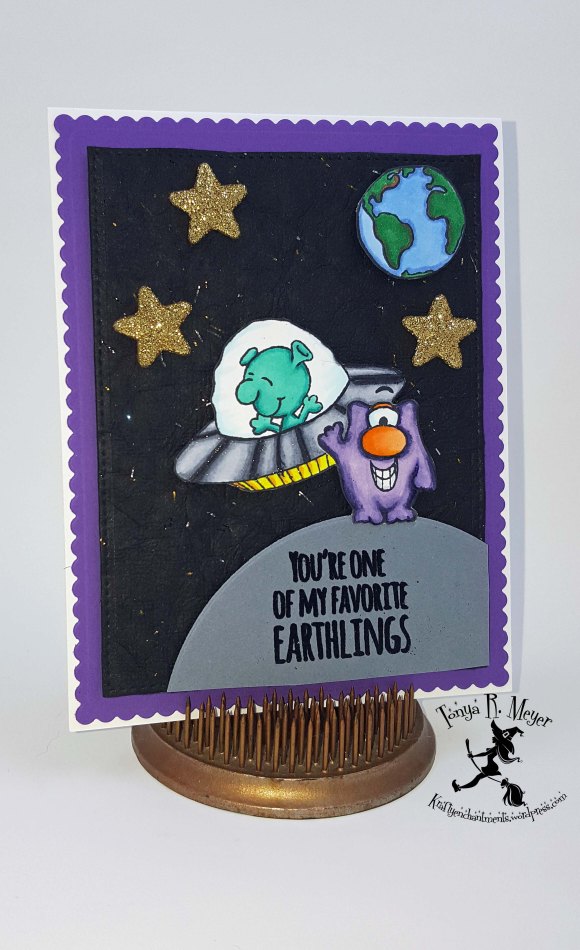 This cut stamp set turned into a cute card in just a short amount of time. I love it and I was able to cheer my hubby up a bit. I know everything’s going to be OK and we’ll be that much better for this experience.

Thanks for stopping by! Have a crafty day!